The Venue at StoneWater offers a variety of savory and sweet menu options from the health conscious to the indulgent, all utilizing fresh, seasonal ingredients. Our catering packages can accomodate on- or off-site event needs including servers, bartenders, linens, tables, chairs, place settings and more. 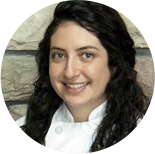 Inspired by the seasonality and freshness of locally sourced produce, Kathryn Neidus brings an innovative take on rustic American cuisine to StoneWater. Born and raised in Gates Mills, Ohio, Kathryn’s interest in culinary arts began at Kent State University where she earned a degree in Hospitality Management. Her love for cooking was solidified during a work-study program at Apicius in Florence in the summer of 2008, where she became immersed in regional food and wine.

Upon graduation in 2009, Kathryn attended and graduated from the New England Culinary Institute in Montpelier, Vermont and developed a deep appreciation for buying local and cooking seasonally. Her first of several apprenticeships brought her back to Cleveland to train under Doug Katz on the line at Fire Food & Drink, known for its locally sourced menus. Soon after, Kathryn temporarily relocated to Los Gatos, California to work for Chef David Kinch at Manresa, a three-starred Michelin restaurant known for its extravagant farm-to-table menu.

Kathryn honed her skills during a second year internship at The Chef’s Garden in Huron, Ohio. She spent hours in the greenhouse of the esteemed purveyor, recognized for its harvest of fresh produce, herbs and edible flowers and a renowned source for notable chefs and restaurants across the country. Kathryn trained at the in-house Vegetable Institute, an industrial and state-of-the-art kitchen where chefs from all over come to host events, conduct demonstrations and seminars.

After returning to the Midwest, Kathryn worked alongside some of Cleveland’s finest chefs such as Zack Bruell at L’Albatros, where she learned the art of French cooking and tended to the vegetable garden; Brandt Evans at Blue Canyon, Dave Gromelski at Gavi’s and Chris DiLisi at The Willeyville. This work-experience was invaluable and only deepened Kathryn’s desire to share her love of regional and American cooking to international fare.

In 2014, Kathryn ventured out on her own to establish Rustic Radish, a farm-to-table catering company that is, “humble at our roots; delicious to the core.” Built as a “co-op of culinary artists,” each member of the team brings a unique offering, technique and specialty – from savory to sweet – that is complementary. Clients are treated to custom-crafted menus comprised of fresh, flavorful bites that are modified based on nutritional preferences and dietary restrictions, including vegetarian, vegan, gluten-free and dairy-free.

As Kathryn’s catering business flourished, she took on the role of Executive Chef at StoneWater Golf Club in Highland Heights, Ohio. There, she oversees regional inspired menus for the Golf Club’s The Rustic Grill, delivery and takeout service, as well as private events at the on-site Venue and outside catering.

Kathryn currently resides in Kirtland, Ohio with her husband Eric and dog Cooper.